When it comes to French food, there are the classics everyone knows, and then there is the rest.

As a matter of fact, the world famous snails and frogs’ legs aren’t what French people eat on a regular basis.

Instead, the vast majority of French cuisine is a regional affair.

From the fish and tomato heavy diet in the South, to much cheesier affairs in the mountains, and duck every way in the South West, there’s much more to French food than your regular café might have you believe.

Below is a list of 30 lesser-known regional French dishes that are worth ditching up your usual steak-frites for!

Bouillabaisse is a traditional Provençal fish stew. It was originally made by Marseille fishermen to use the fish they were unable to sell at the market.

The traditional version includes at least three kinds of fish, and there usually is some seafood inthere as well. Vegetables and potatoes are also simmered in the broth. The whole lot is served with rouille (a spicy, saffron and chilli infused mayonnaise) and grilled bread.

Try it at: Brasserie Zédel, as well as many other London restaurants including popular chain Café Rouge and Brasserie Blanc.

Typical in the French region of Alsace, baeckeoffe (“baker’s oven”) is a mix of sliced potatoes, onions, mutton, beef and pork which have been marinated overnight in white wine and juniper and slow-cooked in a sealed ceramic casserole dish.

The dish was a way for French women to have something to put on the table on laundry day. In the morning, they would drop the pots off at the baker, who would cook it in his oven during the day and the children would pick it up on their way back from school.

Try it at: Brasserie Zédel, where it’s the dish of the day on Tuesdays.

The simple-looking yet devilish to prepare dish consists of various parts of a duck, served in a sauce of its own blood and bone marrow, which is extracted by way of a press.

Try it at: Otto’s, where they also serve a lobster dish along the same lines.

A speciality from the region of Bordeaux, canelés are small French pastries flavored with rum and vanilla.

The recipe is very similar to that of a traditional French crêpe batter and results in small cakes boasting a soft and tender custard center and a dark, thick caramelized crust.

Try it at: Babelle, or indulge your and your guests’ sweet tooth by ordering a few dozens from Yvonne & Guite.

Popular in the northenmost parts of France, as well as in Belgium, carbonnade is a sweet and sour beef and onion stew, made with beer and usually served with fries or boiled potatoes.

This dish of grated celeriac seasoned with a mustard and vinegar flavoured mayonnaise is a school cantine classic, where it’s usually served as a starter. However, it’s best served alongside some grilled meat, especially pork and sausages.

Try it at: Terroirs, where it’s currently served alongside grilled eel.

A German import into French cuisine, especially popular in the bordering region of Alsace, choucroute is a preparation of hot sauerkraut with meat and potatoes.

Though there is no fixed recipe, traditional garnishes include three kinds of sausages (Morteau, Strasbourg and Frankfurt) and salt pork in one form or another.

Try it at: Unsurprisingly, Alsatian-brasserie-inspired Bellanger is the place to go!

Coq au vin is a winter warmer kind of dish, made of chicken, braised with wine, lardons and mushrooms.

Traditionally, red Burgundy wine is used, but many other regions make their own version of coq au vin using local varieties, such as coq au vin jaune in the Jura (deeeeeelicious!) or coq au Riesling in Alsace.

A flamboyant take on the much-loved French pancake, crêpes Suzette are served with a sauce of caramelised butter and sugar, orange juice and zest and Grand Marnier, flambéed in a table side performance.

Originally used as a way to preserve the meat by salt curing it, then cooking it in its own fat, duck confit is considered to be one of the finest French dishes.

It is made across France but is generally seen as a specialty of the duck-rearing region of Gascony. Traditionally, all the pieces of duck are used to produce the meal, though today, it’s most common to use the thougher leg meat that way.

Try it at: Chez Elles, where it’s served alongside another duck-enriched South-West classic, Sarladaise Potatoes.

Foie gras is a usual sight on french inspired restaurant menus, where it usually features as a terrine served with toast and chutney.

Less common is ‘foie gras poêlé’. A hot alternative to the luxurious cold slab, it’s made of raw foie gras that has been roasted, sauteed, pan-seared or grilled.

It’s usually served with pan-fried fruit such as fig or stone fruit, or atop roast beef tenderloin (Tournedos Rossini).

In Brittany, a proper meal is constituted of traditional buckwheat galettes and cider.

Galettes are usually garnished before being folded. One of the most common variations is the Galette Complète, garnished with grated cheese, ham and a fried egg.

Try it at: Mamie’s

Typically, Gâteau Basque is constructed from layers of shortbread pastry with a filling of either almond or vanilla pastry. Sometimes, preserved cherries are also added to the filling.

A gougère is a baked savory choux made of choux dough mixed with cheese (commonly grated Gruyère, Comté or Emmentaler).

Gougères are said to come from Burgundy, where they are generally served cold when tasting wine in cellars, but also warm as an appetizer.

Try it at: Colbert, Brawn

Try it at: Brasserie Zédel

Kouign Amann is a Breton round crusty cake, originally made with bread dough that has been enriched with butter and sugar.

The strict, traditional recipe insists on a ratio of 40 percent dough, 30 percent butter, and 30 percent sugar, making it some sort of croissant on steroids and a very indulgent treat indeed!

Try it at: Dominique Ansel Bakery, where the DKA has gathered a following almost as strong as the trademark Cronut. Alternatively, Temper serves an extra-indulgent version with salted caramel sauce & dulce de leche ice cream…

“Rabbit is probably the biggest divider between our two nations” says chef Raymond Blanc. “The French on one hand view rabbit as food; the British as a pet”.

Which may explain why lapin à la moutarde is nowhere as common this side of the Channel as it is in France. Regardless, this dish is an absolute classic!

For a bit of a twist, try Mouclade, where the sauce is thicken with crème fraiche.

Try it at: Chez Elles

The classic lentil and ham hock stew combines the advantages of being very easy to prepare, relatively unexpensive, tasty and filling, making it a very popular winter dish in France.

Farçis are a Provence speciality and are usually prepared by emptying the insides of summer vegetables and stuffing them with a combination of sausage meat, bread or rice and herbs before baking them.

Try it at: La Ferme

Pissaladière is a dish which originated from Nice in Southern France. It consist of bread dough, topped with caramelised onions, black olives and anchovies.

Now served as an appetiser, it was originally a morning snack.

Try it at: Blanchette

One of the simplest French recipes, yet most beautiful ingredient combination there ever was.

Try it at: Chez Elles, where it’s on the lunch menu.

Poule au Pot, just as Boeuf Bourguignon, is one of the most classic of classic French dishes.

It consists of a vegetable-stuffed chicken, poached with pieces of beef meat and simmered until the meat falls of the bones. It’s similar to Pot au Feu in the way it’s cooked, though the latter is made with salt pork as its main source of protein.

Try it at: The eponymous La Poule au Pot

Lyon and Nantua are famous for their quenelles de brochet (pike). They may be served sauced and grilled, or with a variety of sauces.

Try it at: Pique Nique, where it’s served as a very elegant Vol au Vent with sauce Nantua. 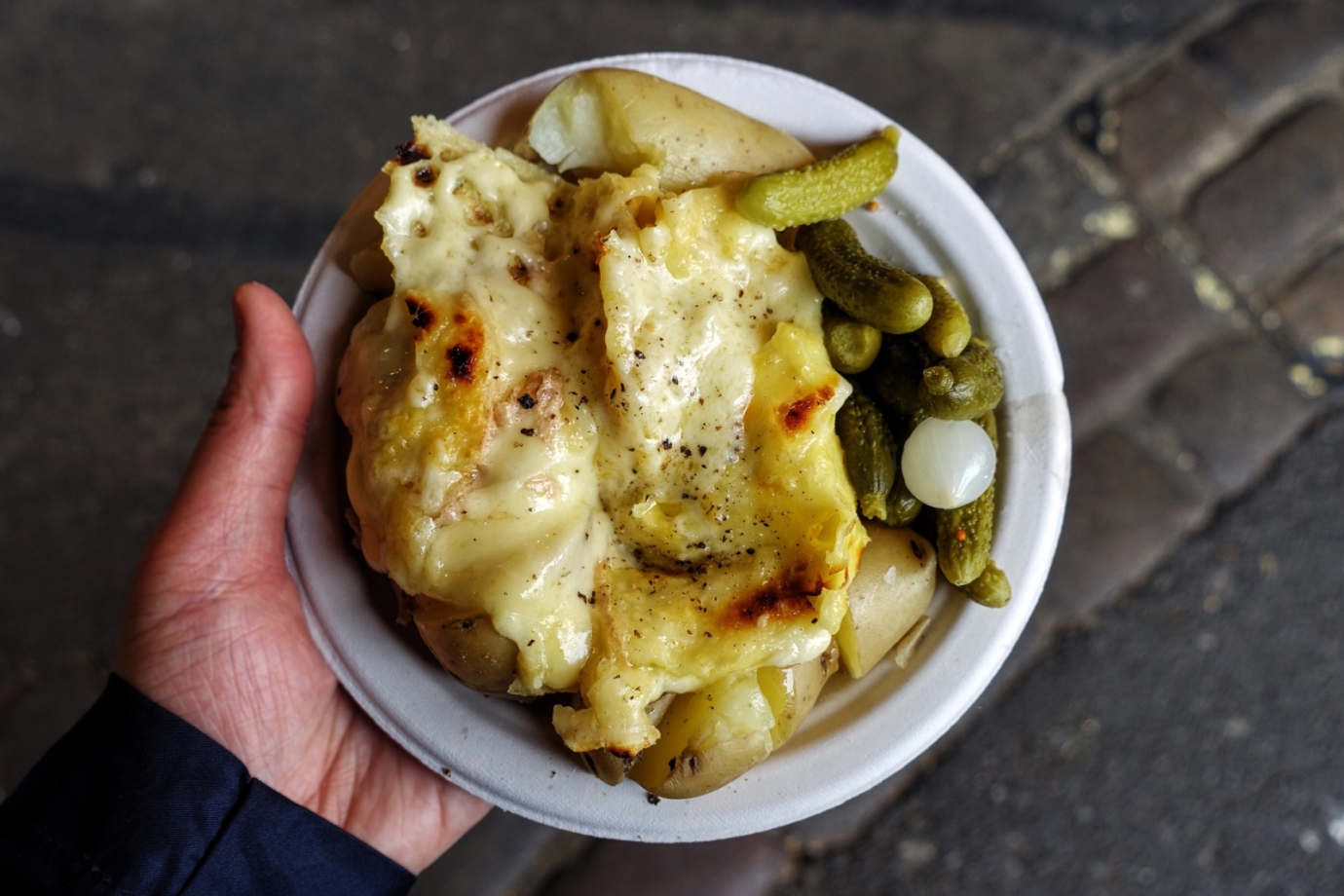 Raclette is a semi-hard cow’s milk cheese, that is most commonly used for melting. In the eponymous Franco-Swiss dish, the cheese is heated, either in front of a fire or by a special machine, then scraped onto diners’ plates.

The term raclette derives from the French word racler, meaning “to scrape”.

Try it at: the Borough Market, where Kappacasein serves theirs with all the trimmings, street-food style.

A speciality of Touraine, these slow-cooked cubes of pork belly are usually purchased from your local butcher and make for the perfect snack.

So good in fact the last piece usually starts up a fight (that I would totally win, would my brother not be freakishly strong).

An absolute classic of café and bistrot cuisine, this simple goat’s cheese on toast focused salad doesn’t seem to have quite made it over here just yet. Which is surprising, considering how much people seem to looooove cheese anything in London!

Try it at: Chez Elles, where it’s a lunch menu favourite!

Another classic on the menu of bistros and small restaurants throughout France, this typically French salad hailing from Lyon is all about contrasts. Salty lardons, creamy poached egg, crunchy croutons and bold mustard dressing make it simplicity at its very best.

Try it at: It’s currently on the menu at Bon Vivant, and a good lunchtime pick from Paul.

A symbol of French ‘New Cuisine’, the classic salmon with sorrel was created in 1962 in Roanne’s famous Maison Troisgros restaurant by some sort of happy accident. It quickly became so popular the local train station was painted in similar pink and green shades and that taking the dish off the menu could only be done under the condition that customers could still order it regardless.

Tarte flambée (or flàmmenküeche) is an Alsatian-Mosellan and South German dish made of bread dough rolled out very thinly, covered with crème fraîche, thinly sliced onions and lardons and cooked in a wood-fired oven.

There are many variations of the original recipe, the most common being the addition of grated cheese (gratinée) or mushrooms (forestière).

Try it at: Bellanger serves the traditional version, as well as cheesy and sweet twists on it.