Blogging makes you do crazy things. Visiting 9 of London’s best coffee shops in one day was definitely one of them.

Now, let’s come clear: I have a weird relationship with coffee. I’ve always loved the taste (I used to drink coffee with milk from my mum’s cup when I was no older than 6 or 7) but my tummy’s not the biggest fan of it, so I can’t actually drink much of it.

But when the lovely folks behind The London Coffee Festival invited me for a day full of coffee beans and fun, I decided to take one for the team and join in!

First stop was the lovely Coffeeworks Project in Islington. Now, that one was not exactly new to me as it’s local to me, so they’re my go-to when I need that extra caffeine-boost on my way to work.

Those guys do the best cakes. Seriously. Especially their salted caramel brownies! 😍

…but just to make sure it was the best (I never thought of questioning that fact, I mean, it’s salted caramel!!), we got a little selection of the said brownies.

Look at that! So fudgy! Which is how brownies should be in my opinion. If they’re too fluffy and aerated, they’re really just sponge, aren’t they?

And of course, there was some coffee. I initially wanted to get espresso but ended up going for filter coffee as I didn’t want to start with something too strong.

I just had time to drink a few sips and it was already time to jump on our dedicated mode of transport for the day!

A private double-decker no less! I could get used to that (and was definitely making plans to turn this into an office some day, wouldn’t it be awesome?)!

Next stop was Caravan on Exmouth Market, which had been on my bucket list FOREVER! They always come up in lists of places to go for brunch in London, and now that I’ve tried they coffee, I can tell that they’ve really strong game indeed! I suppose I’ll have to move it up a few spots and make my way there for eggs and things some day! 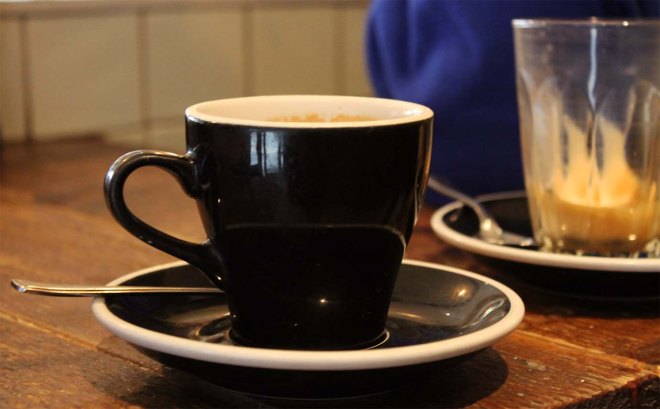 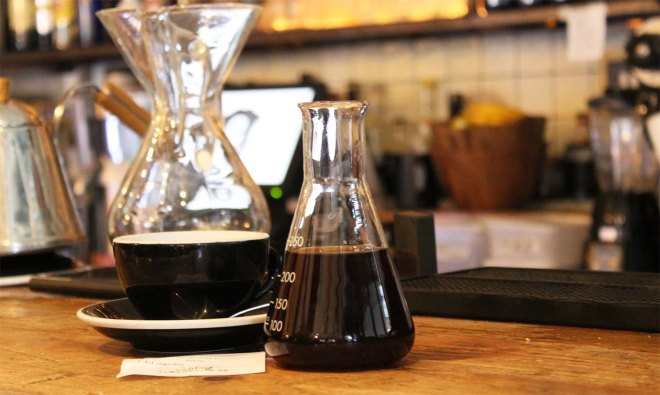 I barely had enough time to practice my pouring-shot skills that it was already time to leave. Within a few minutes, we were dropped at Black Sheep Coffee on Charlotte Street with the romise of a very special coffee experience. 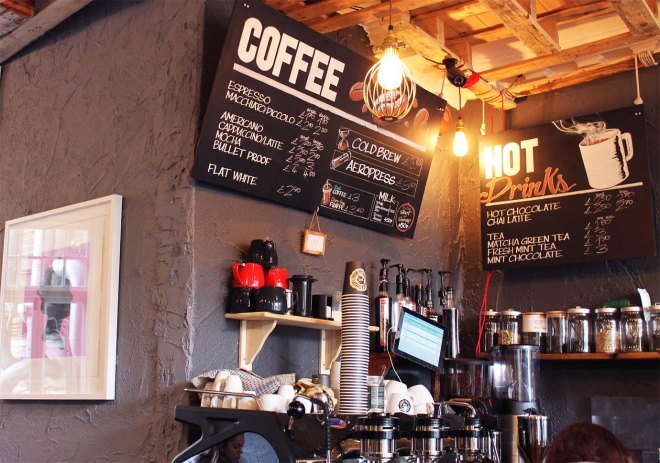 Black Sheep opened with the objective of challenging the traditional coffee scene with their “Robusta Revival”. Robusta coffee beans are less acidic but far more bitter than other species and makes for a very new experience indeed! 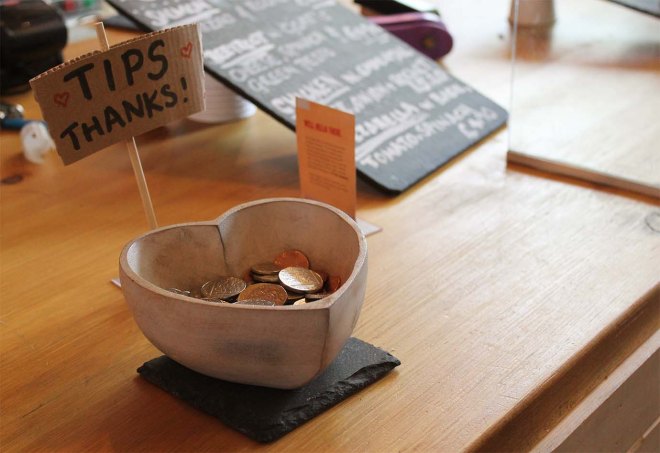 Aren’t those cups the cuttest?

As promised, this was a very different tasting experience. One of the things I enjoy most about coffee is the smell and robusta simply… doesn’t smell like coffee, which was really strange and quite disorientating at first. I did enjoy the taste though, and it truly was unlike anything else I had ever try. So if you’re a bit of a coffee connoisseur, Black Sheep’s definitely a must-go!

Our next stop, Kaffeine, was just a few steps away and it definitely was one of the highlights of the day for me!

I obviously fell in love with the neon sign. And more importantly, with the staff possitive energy and the general vibe of the place!

✨Very much considering to make some sort of carrot-cake jam now! ✨

These guys also have the BEST food counter! I wanted to try absolutely everything!

But my eyes truly lit up when I saw this beauty! Avocado, mango, prawns, cashew nuts… pretty much my dream salad, really!

I thought I had made my choice. But obviously, that was until I looked up and was faced with the most tempting cake shelf I’ve ever seen.

Making a decision wasn’t easy, but I was told that the banana bread is an absolute must-order by at least three people, so I ended up ordering it. I mean, if so many people agree on one item, it must be good right?

Because we’d been eating since the morning, I didn’t realise it was already lunchtime but was more than happy to soon find myself in Benugo. 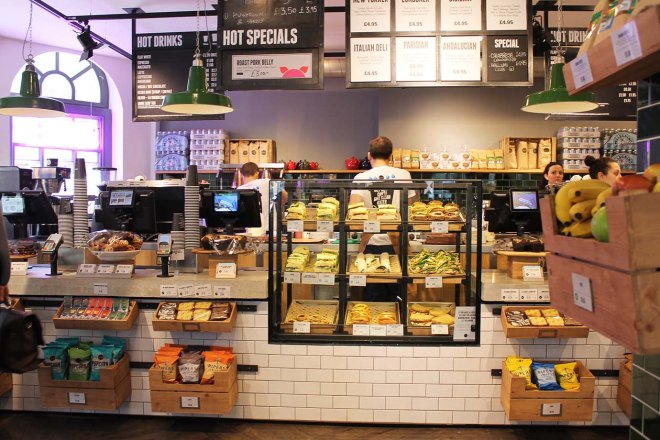 I’m not even sure I was hungry to be honest, but a little (relatively healthy) feast was awaiting us (and it would have been rude not to give everything a chance, wouldn’t it?). 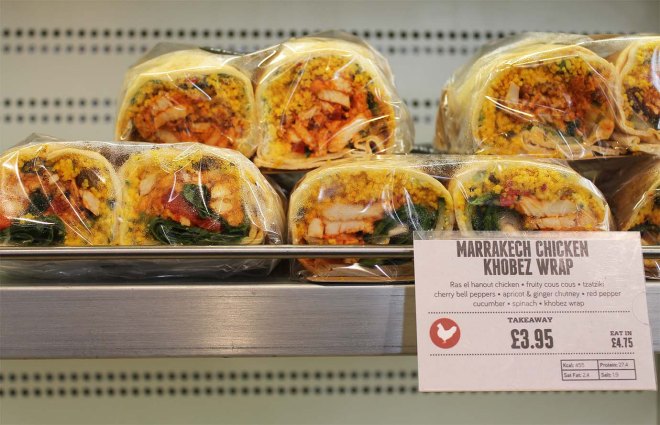 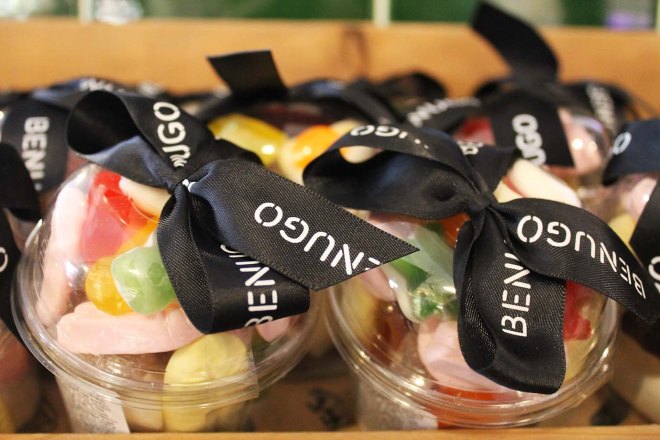 Rows after rows of delicious goodies to choose from. I so wish I had one of those near(er) my office! 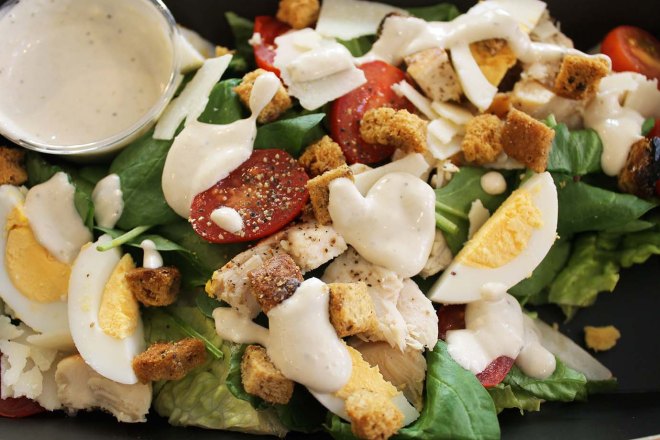 I went for a classic Ceasar salad, which was perfectly balanced and moreish! The sauce was especially good as it wasn’t too thick or cloggy.

Plus I might have had a bite of the different sandwiches on offer… my favourite being the one with tomato, mozzarella and fresh basil (obviously). 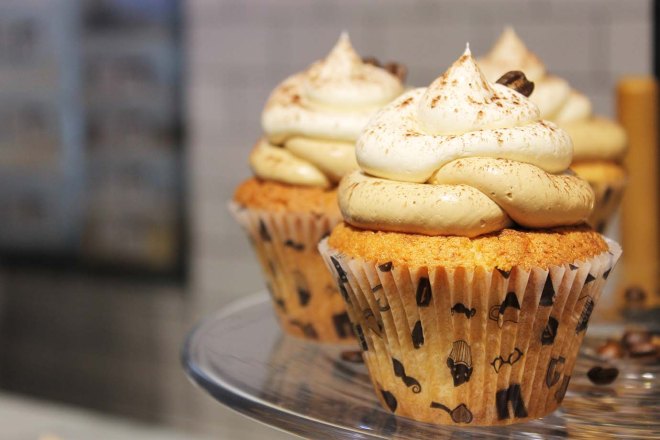 And how good do those espresso cupcakes look? They were amongst the best I’ve had in a little while, thanks to a very fluffy batter and lightest of coffee butter creams! I’m usually not the biggest fan of cupcakes (they more often than not look better than they taste no?), but those were a dream! 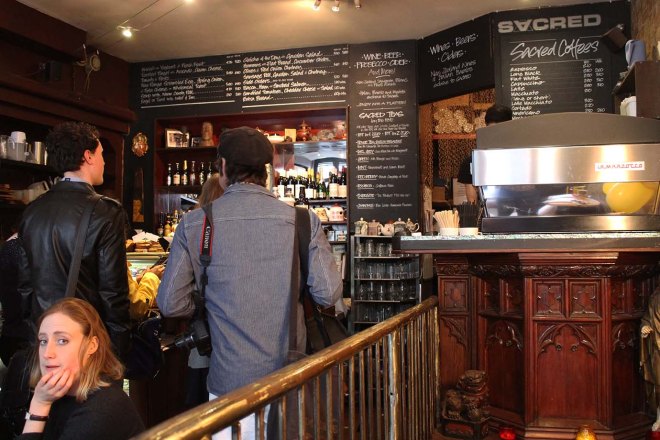 We then stopped for a little caffeinated treat at Sacred on Carnaby Treat. 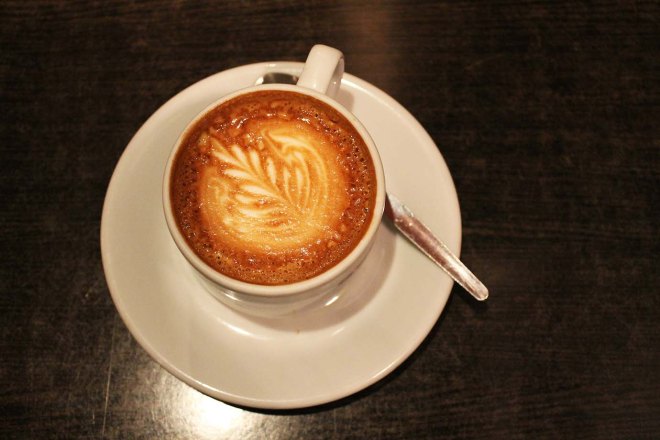 Those guys sure know their coffee-art!

And a little bird told me that they’re starting some coffee cocktails soon too… 🙌🙏 but we didn’t have too much time to investigate those, so I’ll have to go back… You know, just to be sure!

Our next stop sure put a big smile on my face. Let’s put it quite simply, I loved everything about Timberyard: the space, the people, the cakes… 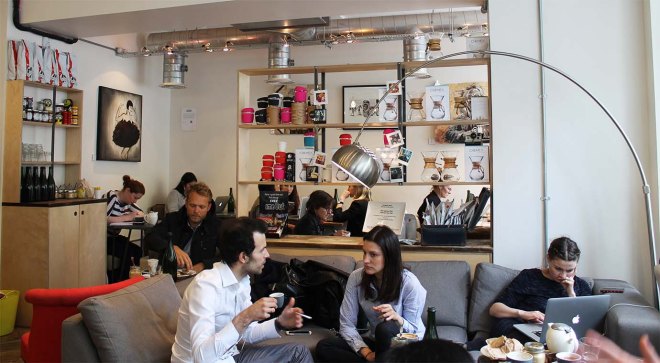 From the second I set foot in the shop, I just wanted to move in. Everything was just perfect. 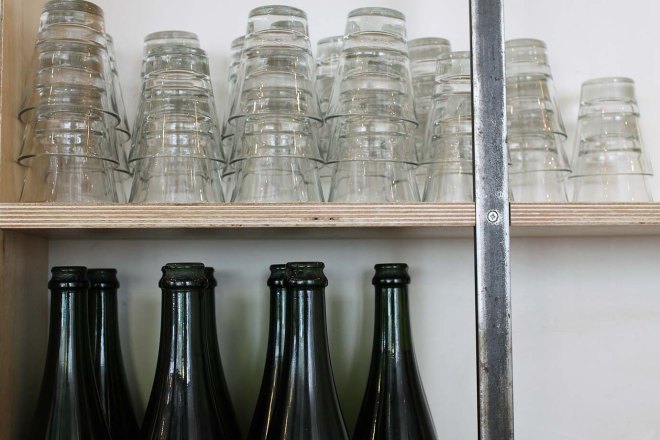 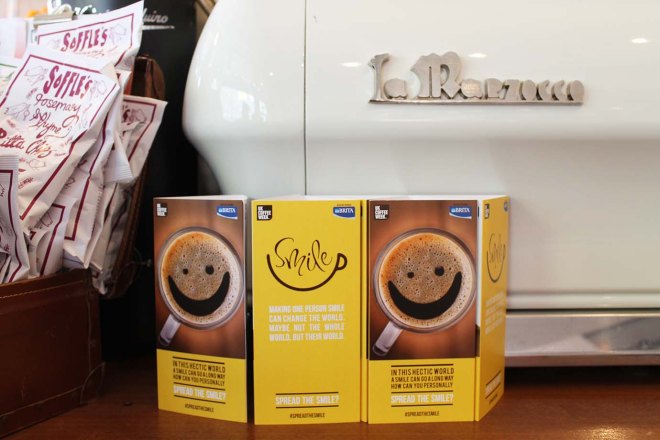 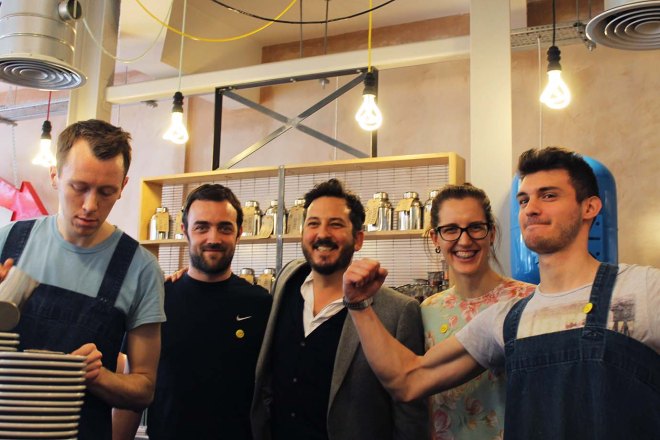 And the team’s pretty ace too! 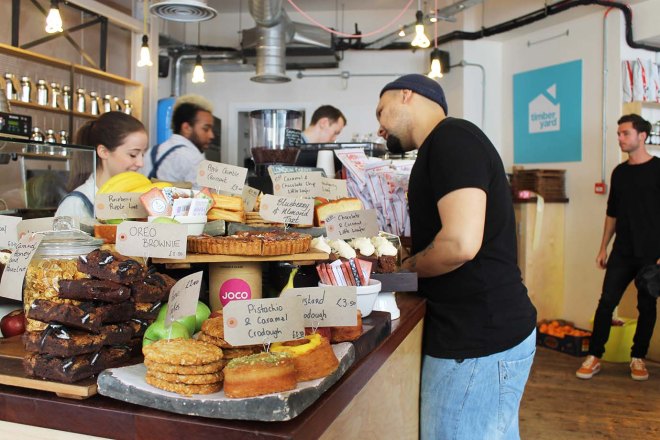 And the food, oh the food!

But for once it didn’t take me ages to decide what I wanted! Dulche de Leche Cronut anyone? Trust me, you should!

We hoped on the bus one last time to reach our very last stop. I couldn’t help myself and clicked a few pictures on the way… 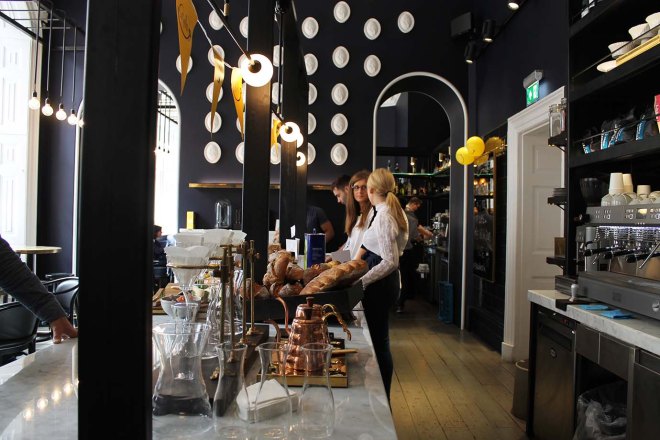 Nestled inside the Somerset House, Pennethorne’s is one of London’s true hidden gems, where we met James-Lee Campbell, Pennethorne’s head barista for a bit of a coffee degustation masterclass. After that much coffee, you might think I would tire of it, but each and every one we tried was so different it didn’t seem like that much!

The master doing what he does best… coffee! 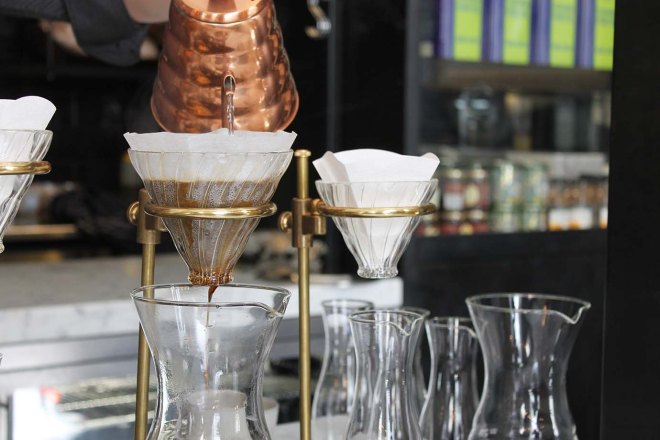 We tried out two different blends, including this month’s special, Tanzania Kilimanjaro, which was probably the strongest of all the ones we had that day, but it was also my favourite! 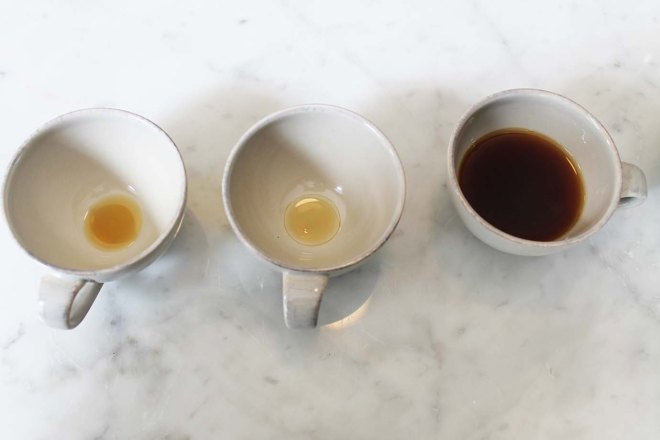 So many cups altogether though! Thanks London Coffee Festival for taking me on this coffee adventure (and the double-decker!), I truly enjoyed discovering the variety of the coffee offering in London and experiencing different blends and species to find my own favourite!

If you want to find out more about London Coffee Festival and all the wonderful things they do, head to their website: http://www.londoncoffeefestival.com.

What’s your favourite kind of coffee? Have you ever been on a coffee tour before?